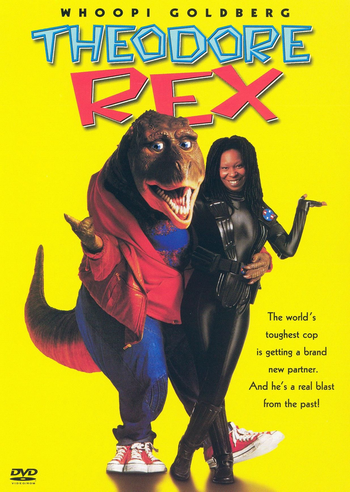 And it just gets weirder from there.
"Did anything weird happen tonight?"
— Theodore
Advertisement:

According to an Opening Scroll, the story is set in a Dark and Edgy Cyberpunk city "A long time ago in the future", where humans coexist with anthropomorphic dinosaurs and other prehistoric animals that have been resurrected and genetically modified by well-known billionaire and scientist Elizar Kane. It's essentially a buddy cop movie with dinosaurs. Theodore is an anthro Tyrannosaurus rex who wants to be a cop. He gets his chance when he is partnered with Katie Coltrane (Goldberg) to solve another the murder of another anthro T. rex named Oliver.