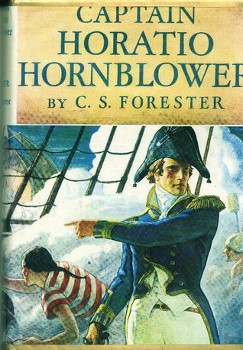 "I recommend Forester to everyone literate I know."
— Ernest Hemingway
Advertisement:

A series of stories about a British naval officer set during The Napoleonic Wars and probably C. S. Forester's most well-known work. The eponymous character, Horatio Hornblower, starts as an overaged midshipman at the start of the French Revolution. Though unprepared, shy, and awkward, his knack for innovation and a sense of determination propel him to attempt many daring and improbable feats. While most who meet him recognize him as a daring and intelligent officer, Hornblower can only view himself with "a sort of amused contempt" at best, and vicious self-loathing at worst, thanks to constantly overanalyzing and criticising his motives.

Fighting the eccentricities of the Royal Navy and his own temperament as much as the French and other enemies, Hornblower rises through the ranks with difficulty, worrying about his poverty, the many ways his career could be ruined, and the constant possibility of violent and painful death; meanwhile he conducts his missions to the utmost of his considerable ability. His career is detailed in twelve novels (written out of chronological order) and several short stories, and he rises from seasick midshipman to Lord and Admiral.

The books also describe the mechanics of sailing wooden warships in exquisite detail, but Forester does go to the trouble of (occasionally) explaining the jargon to his readers, which may make them more accessible to the average reader than the Aubrey-Maturin series.

and James A Gordon.

Of somewhat dubious canonicity (see Canon Discontinuity). Three of them were published in magazines, while the last two were included with the uncompleted text of Hornblower and the Crisis. All of them were compiled for The Hornblower Addendum, only available on e-readers.

Notable for inspiring modern works such as: