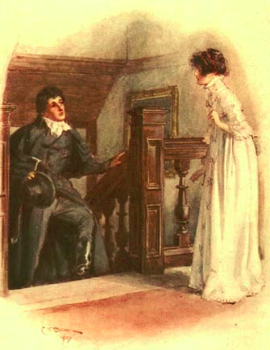 No one who had ever seen Catherine Morland in her infancy would have supposed her born to be an heroine.
— Opening Line
Advertisement:

The definitive Gothic parody, Northanger Abbey was Jane Austen's first completed novel, which she originally entitled "Susan"; it developed further the satiric vein found in her juvenalia, such as Love and Freindship. However, circumstances prevented the novel from being published until after her death in 1817.

The fourth of ten children, and eldest daughter, 17-year-old Catherine Morland is a Tomboy grown into a major Gothic Novel fangirl. She's become so involved in reading that she fancies herself as the heroine of such a work as The Mysteries of Udolpho. One day, she is invited to come along with the childless Allens for a trip to the spring resort of Bath. There, she meets two families, the Thorpes and the Tilneys. The Thorpes' eldest son, the egocentric twit John, tries to woo her. However, Catherine fancies the Tilneys' second son, the gentleman Henry. Henry's father, General Tilney, invites Catherine to the Tilneys' estate, the eponymous Northanger Abbey. There, Catherine's expectations of the world clash with bitter reality.

Countering the Adaptation Overdosed tendency of Austen's other works, this has to be the least adapted of all her works. It was twice adapted into Made for TV Movies, once by The BBC in 1986 and once by ITV in 2007. The PBS series Wishbone also used it as the basis of an episode, with the eponymous dog in the role of Henry. Marvel Illustrated released a Comic-Book Adaptation starting November 2011, script by Nancy Butler, pencils and inks by Janet Lee, and covers by Julian Totino Tedesco. It was also the second book given a modern day Setting Update by The Austen Project, written by Val McDermid.

I leave it to be settled by whomsoever it may concern, whether the tendency of this work be altogether to recommend parental tyranny, or reward filial disobedience.
— Closing Line