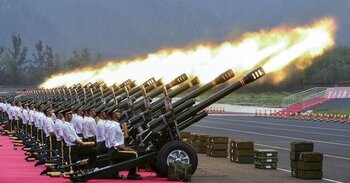 Being three sevens, twenty-one is considered an auspicious number. It shows up in card games, and in symbolism, but also as a sign of respect. Firing guns as a sign of respect began with the navy, firing your stores dry to demonstrate lack of hostile intent. It evolved into a show of respect, with more guns being fired the higher the rank of the visiting dignitary.
Advertisement:

It is also often encountered at funerals, as a sign of respect to the departed, typically for police officers or military personnel. Traditionally, of course, it was cannons, but rifles are considered acceptable. At military funerals it may also be accompanied by Taps, or The Last Post for Commonwealth militaries. See also Missing Man Formation.

The number of gunshots fired doesn't have to be twenty-one, but that's the highest number (traditionally reserved for heads of state) and tends to show up more often in fiction. The supertrope would be Due to the Dead.

and the 3-Volley Salute

Supertrope to Three-Volley Flinch, which is a character reaction to this trope.