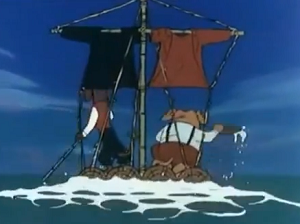 You make a sailboat and decide to sail it in a bathtub or in any body of water you can find outside such as a pond, a stream, or a lake. But uh oh! Your boat doesn't have a sail, what do you do?

The simplest thing you can do is use something as a makeshift sail, whether it be a leaf, napkin, or even your pants or shirt. Sometimes may even be made of improbable materials. But that doesn't matter in most cases. Either way, now that your boat has a sail, on with ye journey!

Essentially, this is a trope where a boat or raft of any kind is devoid of a regular sail before being given an unorthodox sail.

Can be a part of MacGyvering.

Similar to this is: Improvised Parachute.