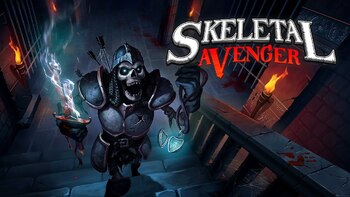 My last memory was a burning palace and the silhouette of my betrayer looming over me.
Then, total darkness. After a while though, a strange vision appeared.
Opening Line

Skeletal Avenger is a Roguelite Hack and Slash Video Game by 10tons Ltd.

In the game, you play as a recently-resurrected skeleton who has woken up inside of a dungeon. After making your way out, you approach the sorcerer who resurrected you. They want you to be a new minion for them, and to slay their enemies and return with their bloodstones. In return, they will help you to avenge your death. So, you decide to comply with what they want.