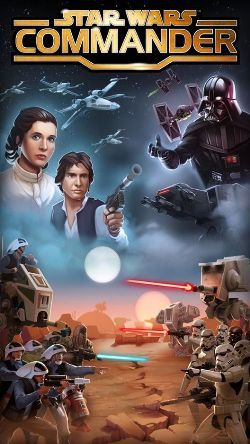 Star Wars Commander is a combat strategy mobile game released on August 21, 2014. It is also a part of the canon established by Disneynote specifics about this are discussed under "Broad Strokes".
Advertisement:

The story is set between A New Hope and The Empire Strikes Back, shortly after the Battle Of Yavin. Players take control of a nameless mercenary allied with another mercenary named Saponza, settling on Tatooine to build a mercenary base of operations. However, they are soon attacked by Jabba the Hutt's forces, and while they manage to fend off an attack, Jabba promises to wipe them off of the map. In response to this, the mercenaries are forced to ally with either the Rebel Alliance or the Galactic Empire, and carry out operations on a variety of planets for the organization they align themselves with.

The game is functionally similar to Clash of Clans, with a focus on base construction/management and the deployment of soldiers that act independently of the player.