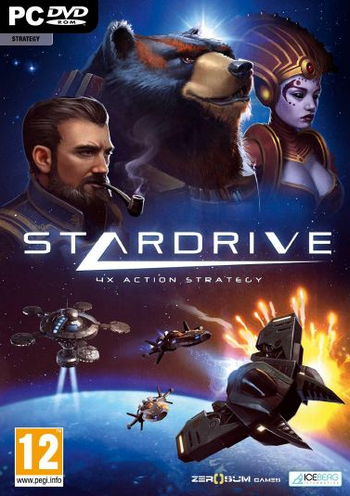 StarDrive is a real-time 4X Sci-Fi Strategy Game, developed by Zero Sum Games, published by Iceberg Interactive, and released in April 2013. The 2015 sequel StarDrive 2 is a turn-based 4X strategy with real-time space battles, a bit like Total War in space.
Advertisement:

In 2016, the sequel also received a DLC named Sector Zero, which doubled the maximum galaxy size from 100 star systems to 200, along with diving the galaxy into hexagonal sectors and adding the ability to construct space stations and such to fortify the key points of those sectors, as well as the alternate ways of winning the game.

The original game was popular for its fun ship combat, cool alien designs and extremely in-depth ship design system. However it was criticized for being content-light and unpolished. The second game looks to add much more content and polish, while keeping the things that made the first game great, and adding some new features such as Leaders which you can hire to govern your colonies. At its core, both games are the same: Start out with one planet and some ships, and use that to build an empire. Also: Samurai Space Bears.

No relation to the anime Star Driver, or to the campaign setting for tabletop game Alternity.