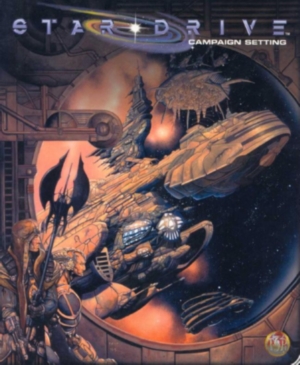 Star*Drive was a campaign setting put out for Alternity, TSR's ambitious but clumsy science-fiction RPG. Much in the way that Greyhawk is considered the standard world for Dungeons & Dragons, Star*Drive attempted to do the same for Alternity. They incorporated all of the player races, cybernetics, mutations, equipment, and psionics mentioned in the Player's Handbook, and put them against a Space Opera backdrop.

While Star*Drive won't win any points for being particularly original or avant garde, it nonetheless a well-done and entertaining setting. Star*Drive has humanity using the titular engine to burst out of the Solar System and begin interplanetary colonization. They accomplish this with the fraal, a race of The Greys with psychic abilities (which humans are also starting to develop).

Humans being what they are, peace didn't last. The First Galactic War erupts, with the increasingly wealthy and powerful colonies on one side, and the ossified Terran Empire on the other. The colonies win, known space is divided into a number of different stellar nations. An uneasy peace lasts for a while, until the Second Galactic War breaks out. Bigger, badder, and longer than the first, the Second Galactic War devolves into a shifting three-way conflict between the various political alliances.

While the stellar nations blast each other into oblivion, the distant colony regions (the Far Reach, the Orion Frontier, and especially the Verge) must struggle to survive without any help from their parent nations. Fending off pirates, rebels, aliens, and each other, some of these colonies manage to prosper, though they rarely extend beyond a single solar system.

The Second Galactic War ends in a stalemate, once the participants realize they can no longer afford to keep fighting. A new UN-type force (emphasis on force) called the Galactic Concord works to keep the peace. The surviving nations are now looking to the abandoned frontiers, sometimes reasserting their dominance, sometimes just trying to reconnect. Needless to say, the reaction in the frontier worlds is decidedly mixed.

This is where the players come in. Most of the game's books are devoted to the frontier region known as the Verge, a chaotic place with all the action one expects from a classic space opera.

Star*Drive was partly resurrected in the d20 System, but in much less detail; and recently

for Rogue Space. This article mainly concerns itself with the original.

Not to be confused with Star Driver, and has nothing to do with the 4X strategy game.

Tropes in this setting: