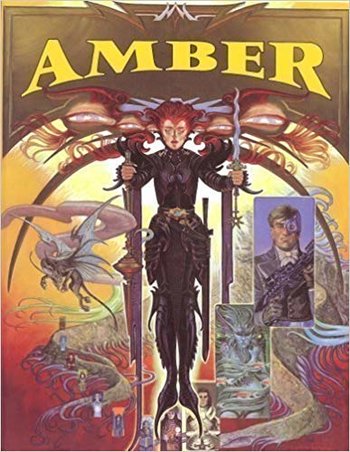 The Amber Diceless Roleplaying is a role-playing game set in the universe of The Chronicles of Amber by Roger Zelazny. The game was created and written by Erick Wujcik in the 1980s, and the original game book was published by Phage Press in 1991. A companion volume, Shadow Knight, followed in 1993.

As the name indicates, this game focuses more on relationships and roleplaying than number-crunching. Most characters are members of the two ruling classes in the Amber multiverse, and due to their extraordinary abilities the only individials who are capable of opposing a character are often from his or her own family. The setting assumes the Game Masters will set their campaigns after the Patternfall war (that is to say, after the "Corwyn cycle" of novels) and that the player characters will be children of the ruling family of Amber or a resident of the Courts.

Rite Publishing funded a game called Lords Of Gossamer And Shadow through Kickstarter based on the system and set in a similar multiverse. Another RPG, Lords Of Olympus, based on a version of the same system, was released by Precis Intermedia.

In addition to tropes from The Chronicles of Amber, this game includes the following tropes: