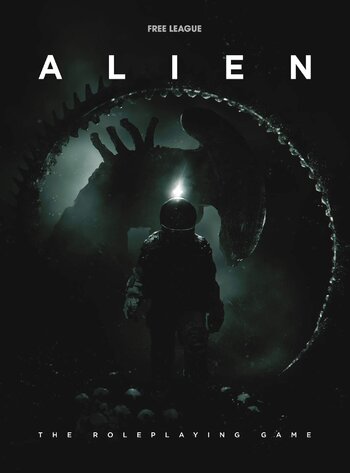 In space, no one can hear what's creeping up behind you...
Advertisement:

Alien: The Roleplaying Game is a tabletop RPG developed by Free League Publishing to allow groups of players to roleplay in setting of the Alien franchise.

There are two broad modes of playing, "campaign" and "cinematic". Campaign games feature the Player Characters going from one scenario to another, usually in a role as something like long-haul space transporters, Colonial Marines, or colonists on the frontier. By contrast, cinematic mode games are focused on short self-contained scenarios that can be completed in a few sessions, but have a much higher lethality where not all the player characters are expected to survive, with a heavy focus on dramatic horror.

See also the parent Alien franchise, which this game obviously inherits many tropes from. How those tropes apply to this game are described below. Beware Late Arrival Spoilers for works in the franchise this game makes direct references to.