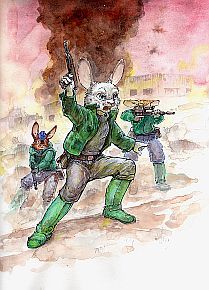 Cover art from the rulebook.
The series is sophisticated and thoughtful, blending hard science and practical military weaponry with cute furry creatures. There are no blasters or zap guns, no clone armies or death stars, just critters trying to make sense of their existence against a starry backdrop."
— Sally 4th, the creators of the game, explaining the premise of the game and the comic in a nutshell.
Advertisement:

Albedo Combat Patrol 164 (also know as just Albedo Combat Patrol or ACP164) is a miniatures-based tabletop war game released by the British company Sally 4th in 2018 and based in Steve Gallacci's Albedo: Erma Felna EDF, a long-running Furry Comic. It's also the first official product based in the comic since 2004 since the Platinum Catalyst RPG game.

The game is notorious for two reasons: Besides following the same premise of the comic and the previous tabletop RPG games, ACP164 changes the formula a bit by including miniatures, making the gameplay more visual than the other games. Also, the game is notorious for another big reason, story-wise: This is the first official product from the franchise that depicts the First Lepine War, the very first war Kanoc Felna, Erma Felna's father, fought in his younger days along with Joseph Arrat. Keep in mind that war was previously a Noodle Incident in the backstory of the comic, and it was rarely described outside some mentions out there and also in some side-stories.

As an additional note, the game is also compatible with the previous RPGs, at least on regards with the use of the miniatures, so you can use either rules in the way you see fit.

More information about the game can be found here

. Also, a succesful Kickstarter campaign began at October 2018 for funding the game.