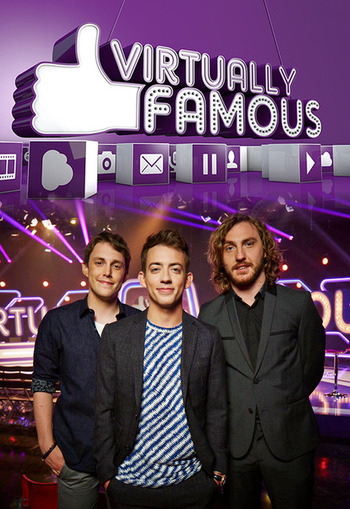 We promise they're famous
Advertisement:

Virtually Famous is a British comedy Panel Show broadcast on E4. It could be compared to @midnight for the only reason that it is a celebrity panel show about the Internet that started in 2014. From 2014 to 2016 it was hosted by Kevin McHale with Chris Stark (the guy who asked Mila Kunis out to get chicken and watch football during a radio interview) and Seann Walsh. For season 4, McHale was replaced by Chris Ramsey, and Stark by Vicky Pattinson. Season 4 also introduced regular panel member Scarlett Moffatt — the three additions are all Geordies from Im A Celebrity.

The show focuses on current internet memes and YouTube hits, and features various British celebrities and reality stars as panellists, bringing on the Internet famous as special guests as well as the subject of round "Meet The Makers". This round is the only one that has remained in every episode, and it involves guessing which virtually famous thing the individual brought into the studio created. Other special internet guests include having Tyler Oakley as a panellist, and Korean Billy as a score master (something they only had that episode).

The show began airing progressively earlier in the year, moving from summer (2014) to spring (2015) to winter (ending up with two series in 2016 — the third at the start of the year, the fourth starting in December through 2017). The first two series featured regular Shout Outs to Glee, which Kevin starred on, even though E4 (who had once been the British broadcaster of the show) no longer was affiliated with it, until it ended in 2015 — at which point it was never mentioned again. Series 1, 3, and 4 are available on Channel 4's web player.

These tropes are virtually famous: