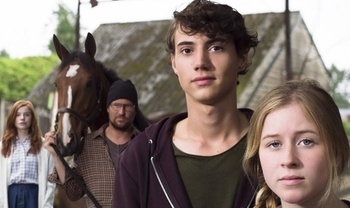 From left to right: Lucy, Mak, Niek, and Nena
Advertisement:

De Vloek van Manege Pegasus (The Curse of Pegasus Hall) is a 2016 Dutch miniseries telling the story of a family that moves onto a haunted farm.

Teen siblings Nena and Niek are part of a family that breed horses for show jumping competitions, and they hope to continue the trade at the newly purchased Pegasus Stables. However, they quickly find out that the reason the stables were so cheap is that they are said to be haunted by Pegasus, the ghost of the original owner's horse, and that mysterious accidents have befallen the previous occupants.

They are joined by Mak, a man with an unknown past who shows up to work at the stables, and Lucy, a girl from the nearby village who does not speak. As strange events pile up, Nena quickly believes in the curse, while her brother and parents are more skeptical.