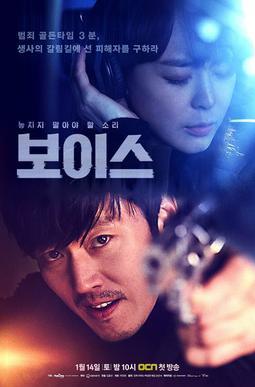 Voice is a Korean Drama that debuted in 2017.

Moo Jin-hyuk is a Korean cop. Tragedy strikes when his wife Ji-hye is murdered by a serial killer. Before she was killed Ji-hye managed to dial 112 (Korean 911) and reach Kang Kwon-joo, an operator, who listens in horror as the killer bashes Ji-hye's head in.

A suspect is arrested for Ji-hye's murder, but Kwon-joo shocks everyone by testifying in open court that the suspect is not the man she heard speaking on the phone right before he killed Ji-hye. Kwon-joo, it turns out, has unusually sensitive hearing. She claims that the voice on the phone belongs to the man who killed her father three years earlier, in what the cops wrote off as a hit and run accident. Jin-hyuk accuses Kwon-joo of taking a bribe, but she sticks to her guns and the suspect is acquitted.

Cut forward three years. Kwon-joo has advanced in the police force, while Jin-hyuk is an alcoholic wreck. She has formed a new emergency response unit, a "Golden Time Team" that is meant to respond to 112 calls and save victims in the ten minutes that is believed to be the optimum time to save lives in danger. She tabs Jin-hyuk for her team, initially to his rage, but eventually they band together to catch the man that killed her loved ones.