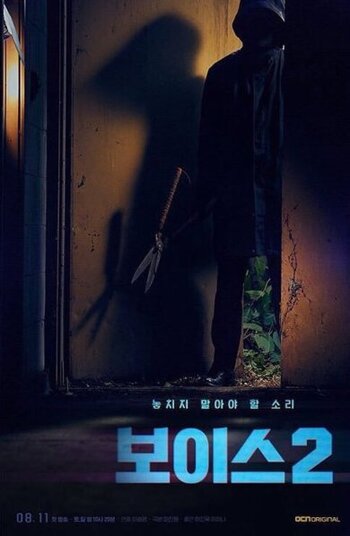 It is the follow-up to smash hit 2017 drama, Voice. Kang Kwon-joo continues to head her own creation, the "Golden Time Team" of first responders, the crack squad that answers the most sensitive 112 calls (the Korean equivalent of 911). Tragedy strikes when Jang Kyung-hak, Kwon-joo's police captain, dies in a bizarre traffic incident where he plowed his van into a bunch of hikers. Violent Crimes Unit leader Na Hong-soo believes Jang took himself out in a murder-suicide, but Kwon-joo thinks there must be another culprit. Who will help Kwon-joo catch the killer?

Not Moo Jin-hyuk, her partner from the first season of Voice, who has taken his chronically ill son to the USA for treatment. This time around Kwon-joo's partner is Detective Do Kang-woo. Three years ago, a masked killer murdered Kang-woo's partner right before his eyes, but oddly left Kang-woo alive. Kang-woo is bent on finding the man who killed his partner, Na Hyung-joon...brother to Na Hong-soo of the Violent Crimes Unit. Hong-soo for his part thinks that Kang-woo killed Hong-soo, but he can't prove it.

Kang-woo hears about the strange death of Capt. Jang, and believes the MO fits that of the man who killed his partner. Cunning police work from Kang-woo and Kwon-joo proves that Capt. Jang was actually murdered, by a man who planted a remote control acceleration device into Jang's van and basically piloted him off the road to his death. The cops catch the killer, a tow-truck driver, but Kwon-joo and Kang-woo are convinced that he had a partner, the true mastermind behind the crimes. Will they catch the bad guy, who is targeting cops?