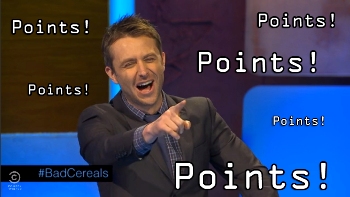 "TV Tropes, you are the funniest website on Earth for the next 23½ hours!"
"It's 11:59 and 59 seconds, and this happened on [Insert Website Here] today..."
—Chris Hardwick, Once an Episode to open up the show
Advertisement:

@midnight is a Panel Game on Comedy Central hosted by Chris Hardwick, in which three celebrities compete for the coveted title of Funniest Person on Earth... for the next 23 and a half hours.

The show primarily deals with internet pop culture and content trending on social media platforms (such as Twitter). While most of the "rounds" are topical and change nightly, there are some common rounds, such as "Rapid Refresh" (multiple-choice questions), "Hashtag Wars" (a Speed Round where the celebrities give responses that fall within a specific theme, e.g. "#RejectedTVTropes"), the "Live Challenge" (a task which is done by the contestants over the commercial break; it usually involves writing a long-form answer for a certain prompt), and then another speed round, after which the lowest scorer is eliminated.note In case of a tie, Hardwick will ask the comedians to name off one last item pertaining to that final Speed Round and have the audience decide whose response was better. The game concludes with "FTW", where the final two (or sometimes, still all three), have to perform one more task (it's another "Live Challenge"); the two responses (but not who wrote them) are shown to the Studio Audience, and the contestant whose response garners the most applause wins the Internet.

The show premiered on October 21, 2013 as a lead-out for The Colbert Report; after becoming Comedy Central's Ensemble Dark Horse, it returned for a full run in January 2014. The show came to an end with its 600th and final episode on August 5, 2017.

Comedians, you have 60 seconds to name as many #tropes that fit the hashtag and go!:

"A thousand points for everyone!"