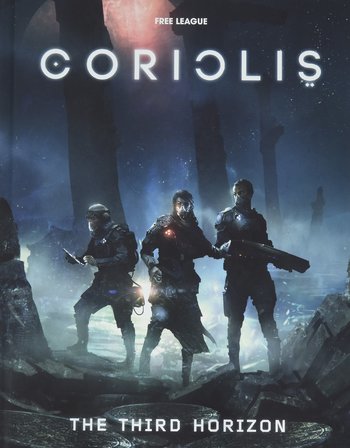 Long ago, two seedships left Earth: The Nadir, and the Zenith. They were sent to the world of Dabaran, many lightyears distant. In the years that followed, humanity discovered the Portals, triggering a diaspora that outpaced the two ships. Humanity settled the Horizons, interconnected regions of stars linked by the portals. The Third Horizon in particular became a haven for free thinkers, radicals, and those looking to escape the grasp of the mother world.

Eventually, the First Horizon attempted to subjegate the others. The Third Horizon resisted, and fought off the invaders. Victory, however, came at a cost. The portals linking the Third Horizon to the others were severed by the weapons they brought to bear. And it was into the war-wearied Third Horizon that the Zenith arrived, lumbering out of the void.

Initially confused and astounded that their home-to-be had been settled for nearly 500 years, the Zenith and its crew moved the seedship to the world at the center of the Horizon. There, they split into two groups. One settled the jungle moon, while the other stripped the Zenith, converting it to a massive space station: Coriolis. Reaching out, the inhabitants of Coriolis built a council of many of the factions that held power in the Third Horizon so as to keep peace between the First Come and the Zenith Colonists. Only the Syndicate and Nomad Federation declined membership. From a nearby gas giant emerged the mysterious Emissaries, who demanded, and were granted, a seat on the council.

But the Third Horizons is by no means at peace. Tension between the factions remains constant, and the Emissaries themselves have brought a conflict of their own. And into this enters the player characters...

Tropes in Coriolis: The Third Horizon include: