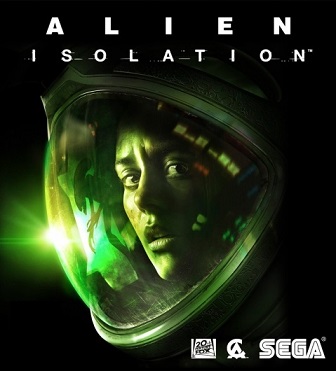 "We get to shut the book, Ripley."
— Samuels
Advertisement:

Alien: Isolation is a first-person Sci-Fi Survival Horror game based on the Alien franchise, developed by Creative Assembly, published by Sega and released October 7, 2014.

Set 15 years after the events of the original film, the game follows Amanda Ripley, the daughter of Nostromo warrant officer Ellen Ripley. Amanda has been searching for answers ever since her mother disappeared on a voyage aboard the Nostromo, and has joined the Weyland-Yutani Corporation as an engineer.

Provided with a lead that the Nostromo's flight recorder was recently discovered on the fringes of the frontier, Amanda heads to the space station Sevastopol to seek answers, only to discover that a lot of really bad shit has occurred — namely a lone Xenomorph, which has massacred the station's inhabitants and is now pursuing her, is loose. Armed only with a handful of devices and her wits, it's up to Amanda to outwit her pursuer and discover the truth about what happened to her mother.

The game takes cues from other first-person Survival Horror games like Amnesia: The Dark Descent and Outlast, and features hide-and-seek gameplay where Amanda is forced to use different tactics to outwit and avoid the Xenomorph stalking her through Sevastopol, while the Xenomorph will adapt to the player's avoidance patterns and tailor its searching appropriately.

On February 28, 2019, Fox released Alien: Isolation — The Digital Series through IGN as part of a 40th Anniversary of the franchise. The series is a retelling of the events of the game built around the game's cutscenes, and some occasional bits of gameplay. The series is made up of seven shorts that transfer the most important events in the game's (mostly) first-person narrative into a (mostly) third-person cinematic experience, and the episodes collectively add a new sequence to the narrative not seen in the game. It can be viewed here

That same year, a novelization of the game was released. It received two direct sequels in 2019 - Alien Blackout, a mobile game more in the style of Five Nights at Freddy's, and Aliens: Resistance, an arc in Dark Horse Comics' ongoing Aliens title.

Beware of Late Arrival Spoilers for the original film.