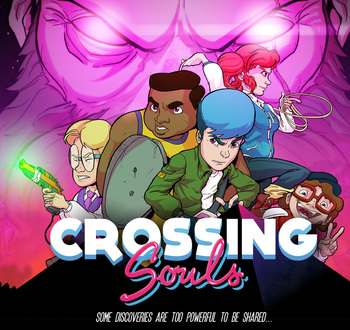 Some discoveries are too powerful to be shared...
Advertisement:

Crossing Souls is an indie 2D top-down Action-Adventure, developed by Fourattic, published by Devolver Digital, and released in April 2018. It is about a group of childhood friends in a small town, who one day discover a dead body near the local lake. The deceased also carried a weird pink pyramid-like stone with him, which the nerd of the group, Matt, soon identifies as the shard of the Egyptian Duat, which has the power to cross over the worlds of the living and the dead. Matt quickly fashions it into a way to see ghosts. However, this same Duat Stone is also searched for by its previous owner, Major Oh Rus, who hopes to use it to Take Over the World...

The game was funded on Kickstarter. It reached its funding goal on December 13th, 2014. It was released on February 13th, 2018.

Major Oh Rus: Pay close attention! You're going to witness the birth of a new God: Oh Rus! Let your death serve as an example for those who dare oppose my reign!HAHAHA!'''