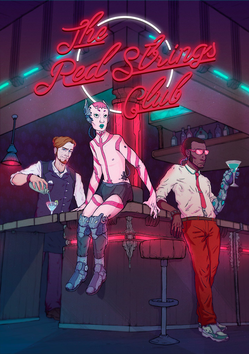 Left to right: Donovan, Akara-184, and Brandeis, from Desonstructeam's Twitter

The Red Strings Club is a cyberpunk adventure developed by Deconstructeam

and published by Devolver Digital, released in 2018. The game is story driven with lots of alternate dialogue options and utilizing an interesting mechanic of extracting information from npcs via carefully aligning indicators to certain points via mixing cocktails.

The player takes the role of a bartender of the eponymous Red Strings Club - Donovan who, aided by his muse Noumenon who may or may not be imaginary, makes cocktails that draw out people's feelings, a useful skill for Donovan who's also an information broker. Assisting Donovan is Brandeis, a hacker with a mastery of social engineering. The duo makes a formidable team in a vast unnamed city.

One night, as they are both relaxing in the club and making casual conversation, an unexpected guest arrives at their door - an Akara android, a new type of robot with vast empathic skills. This sudden visit will naturally change not only their lives but potentially those of every human being on Earth.