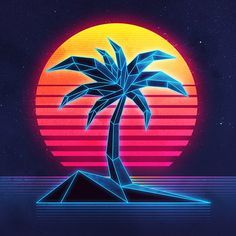 A good visualization of everything Outrun represents.
"Outrun is a style, musical or otherwise. It lives in the 80's, made of the cool visuals and sounds you find from the era. It is sunsets and palm trees, its digital grids and fast cars pushing the redline. Its a romanticized retrospective of a time long gone. I don't consider outrun a genre, because many genres may live within it, electronically speaking. Start with "Outrun" the arcade game, where the name truly comes from."
— Wicca_Jedi, /r/
Advertisement:
Primary Stylistic Influences:

Synthwave, also known variously and interchangeably as Retrowave, Outrun, Futuresynth, 80s Electro, or New Italo Disco is perhaps the ultimate realisation of the Retraux aesthetic in electronic music, coming in three decades after the original source material. Wholeheartedly embracing The '80s in every sense, the style revolves around the synthesizer sound so beloved in that decade and the nostalgic evocation of everything we associate with the era. Memorable treble synth leads, catchy bass lines and finely tuned drum machine snare-kick beatsnote  with gated reverb! TONS OF REVERB! are central, and the cathartic power of guitar/saxophone/key solos are frequently called upon.

Many musicians work exclusively as "extended jam" structure instrumentalists note  often in a progressive style, but guest vocalists occasionally crop up for a collaboration. Some groups are explicitly vocals-based, with these songs more readily falling back on a traditional verse-chorus-bridge structure. Thematic inspiration includes action movies and their soundtracks (and their leading stars), dystopia, love, science fiction, horror, sex, video games, fast women and faster cars, classic cartoons, classic anime, body building, predictions of the future and the iconic, neon-coated beach cities of Miami and Los Angeles. Lyrics, when used, also follow these themes. The Trope Namer for "Outrun" music is the 1986 Arcade game OutRun, the soundtrack of which had the kind of 80s synth vibe that characterizes synthwave.

The artists craft their music with a complex variety of instruments, ranging from cutting edge software sequencers, physical period synth, classic electric rock instruments right down to primitive custom built sequencers. Perfectionist musicians pride themselves on achieving synthetic rock instrumentation which sounds indistinguishable to the real thing. Distribution is similarly varied, from modern social media and MP3s all the way back to limited-run cassette tapes and vinyl. Samples from period media note  Such as iconic quotes from movies are valued, but generally used in moderation. As with many other forms of Electronic Music, the style lends itself well to remixes and collaborations. These musicians are by a rule mostly reclusive, as of course cyberspace affords them that kind of anonymity, in the mode of Daft Punk. Despite the emphasis on 80s Americana, many of the artists are actually from continental Europe, but the UK, Australia, Canada and the USA also get good representation. Some of the North European producers have even moved to the west and east coasts of the States, to better absorb the beach culture and nostalgia for their art.

Retrowave is not only inspired by various movements from the decade (and conversely, by futuristic movements both from back then and from the present day) but also envelops them, as an overarching art form. It is heavily intertwined with the retrofuturistic aesthetic. Songs often sample classic 80s soundtrack songs or Arcade/NES chiptunes. To a lesser extent, the brother and sister decades The '70s and The '90s also get representation, because these were also vintage eras for music, cinema and video games. It remains a cult phenomenon, but perhaps it is on the verge of mainstream recognition given its slowly growing use as soundtrack material in other media.

Many songs are shared via YouTube, and these "videos" are often just a small handful of still images evocative of the era. Of these, many are snapshots of exceedingly bodacious babes... but just as many are stylised art of the badass action heroes which inspired the songs. Some of the images are original, suggesting a film which the song could score which was never released... or which hasn't yet been released. Indeed, some of these tunes are intended to be used for soundtracks, and many already have been. However, some videos are fully fledged clips, sometimes serving as an Animated Music Video for their inspiration, or are other times wholly original productions in and of themselves. The aesthetics are particularly focused on digital grids and stark bold neon fonts, which evoke what the average Joe on the street's conception of computers and the future must have been like back in the day.

is a major, frequently-updated source for finding synthwave tracks and uses videos in the aforementioned style. They also have their own line of T-shirts and other merchandise with the authentic aesthetic. Other YT channels are also good for discovering the style, including artist-specific ones. Albums are often uploaded in their entirety. Also, SoundCloud and LastFM are helpful too. See The Other Wiki's article (specifically the discussion page) for an important distinction between this and the similarly named Synth Wave style; the latter was actually present in the 80s, Synthwave wasn't.

A notable subgenre of Synthwave is Soviet Wave; while Synthwave focuses primarily on American nostalgia for the 1980s, Soviet Wave focuses on Russian 1980s nostalgia and nostalgia for the Soviet Union in general. Essentially it is Why We Are Bummed Communism Fell as a music genre. Musically speaking Synthwave and Soviet Wave are nearly identical, except for some occasional Russian folk influences; the samples come from official speeches as often as from old films. A trend in band names is to use a vaguely scientific term suffixed with a number, e.g. "Proton-4", as if it was a space mission or one of Soviet Closed Cities.

Compare and contrast vaporwave, which frequently draws influence from '80s and Cyberpunk imagery and themes of retrofuturism as well; unlike Synthwave, however, vaporwave is largely sample-based, with only a relative handful of artists writing original pieces.

Some of the major cinematic, animated, video game and televisual influences include:
Notable bands, and their primary themes/inspiration include:

Notable media inspired by, using music from, or otherwise related to the Retrowave phenomenon: