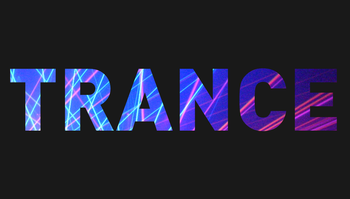 In a state of trance.
Primary Stylistic Influences:
Secondary Stylistic Influences:
Advertisement:
"I try to explain this to people - trance is a feeling. You have this whole debate about EDM or electro, progressive, progressive house, trap, or whatever nonsense. Trance is an addiction and I think everyone listening right now would relate to that."
— Armin Van Buuren

Trance is a genre of Electronic Music with many distinct subgenres. It is often composed with synthesizers, drum machines, and computer software programs, though certain variants and songs may incorporate instruments as well, and is characterized by a tempo typically lying between 125 to 150 beats per minute (BPM), repeating melodic phrases, and a musical form that distinctly builds tension and elements throughout a track often culminating in one to two "peaks" or "drops". While often purely instrumental, vocals in trance are just as common.

What sets trance apart from other genres of electronic music like Techno and House Music is its greater emphasis on melody and structure, aiming to evoke an emotional response and a feeling of being lost in the music from listeners (hence, feeling hypnotized, or in a trance) by mixing layers of different sounds with a distinctly foreshadowed build-up and release. A characteristic of virtually all trance music is a mid-song climax followed by a soft breakdown disposing of beats and percussion entirely, and leaving the melody and/or atmospherics to stand alone for an extended period before gradually building up again.

While trance's origins can be traced as far back as The '80s with certain acid house tracks and early electronic music produced in Europe, it's considered to really have begun in The '90s when a few tracks that focused on regular 4/4 time, 32 beat phrases and kick drums started seeping out of Germany. It was slightly faster than house music but it built up much more slowly while also mixing stylistic elements of ambient. Two tracks in particular, "We Came in Peace" by Dance 2 Trance

and The Age of Love's self-titled song

, stood out as the groundwork for the dance genre, which would go on to split into several different subgenres with different atmospherics and aims for what kind of state it wanted to induce in the listener.

The subgenres are as follows:

There are also various artists who are harder to pin down, such as S.U.N. Project, which could only be described as "rock trance", and Gareth Emery, whose style is akin to a mix of trance, progressive house and pop music, which the artist himself calls "simples".

Trance has also influenced various other genres. For instance, from 1999 to the early 2000's, the Industrial scene began to incorporate various influences from trance resulting in a subgenre called "Futurepop." The modern strains of Eurobeat and Hardcore Techno (hardstyle and happy hardcore in particular) often utilize trance-based melodies, beats and song structures. Some Melodic Death Metal and Metalcore bands have also incorporated elements of the trance genre into their music. Even Dubstep has shown influences of trance, namely the Lighter and Softer chillstep subgenre, though some brostep tracks can feature certain elements to contrast with the dirty drops. More ambient/softer-leaning House Music tracks have elements of trance to them as well.

Something to keep in mind is there is a lot of overlap with these subgenres. To make matters worse, many artists have dabbled in and blended the subgenres even to a point where prog-Goa, prog-psytrance, uplifting psy, psy-tech, prog-tech, uplifting tech ("upliftech"), and uplifting prog ("proglifting") have become recognized as standalone microgenres.

Not to be confused with the movie.

Tropes associated with the genre:

A list of well-known trance artists, bands and musical projects: