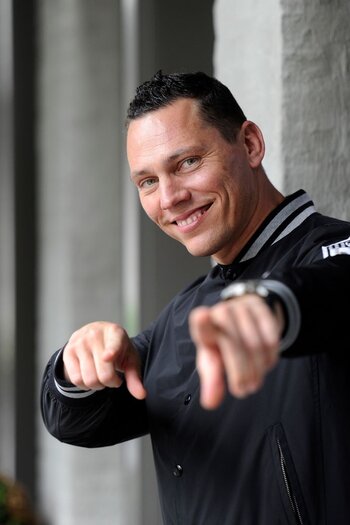 Tiësto is the stage name of Tijs Michiel Verwest (born 17 January 1969), a Dutch DJ and producer. Most famous for his Trance mixes and tracks, though his style has drifted more towards house since 2010.

A quick recap of his career: After some fiddling around DJing house and releasing unnotable hardcore/gabber tracks, he founded his own record label, Black Hole Recordings, in 1997 as a vehicle for his Magik and In Search of Sunrise DJ mix series. Started producing his own tracks, first as collaborative efforts (Kamaya Painters with Benno de Goeij, Gouryella with Ferry Corsten), then solo works; five of the tracks on his first production album In My Memory were widespread hits.

Continued to DJ, becoming famous for playing six-hour sets as a solo act. One of these sets, played for 25,000 people in a stadium in Arnhem, the Netherlands, was made into a DVD, Tiësto in Concert.

In 2004, he became knighted as an Officer of the Order of Orange-Nassau; became the first DJ to perform at the Olympic Games (at the opening ceremonies in Athens; he would later make this into an album, Parade of the Athletes); and was ranked #1 DJ in the world by DJ magazine for the third year in a row. In 2006, he became an ambassador for Dance4Life, an organization raising awareness of HIV/AIDS. In 2007, he began hosting his own radio show, Tiësto's Club Life. In 2009, his single "Elements of Life" appeared in DJ Hero; the following year, the sequel, DJ Hero 2, would feature him as a playable character.

In 2010, he sold his share of Black Hole Recordings to co-founder Arny Bink, passed control of his In Search of Sunrise series to DJ Richard Durand, and started a new record company, Musical Freedom, which would go on to publish a new mix series reflecting his changing musical tastes, named Club Life after his radio show.