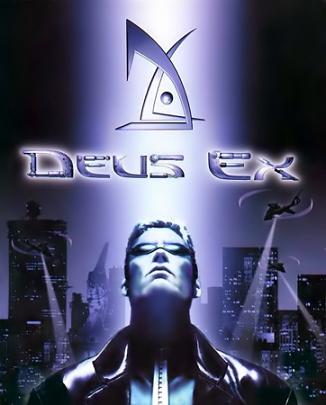 JC Denton works on his tan.
"You will soon have your god, and you will make it with your own hands."
— Morpheus
Advertisement:

Deus Ex is an award-winning First-Person Shooter/Immersive Sim with RPG Elements (or a first-person RPG with shooter elements, as some fans would argue) developed by Ion Storm Austin (a division of, yes, that Ion Storm) and published by Eidos. It was released around the summer of 2000 for Windows and Macintosh. A PS2 port, titled Deus Ex: The Conspiracy, was released in spring 2002. The PS2 version was made available on the PSN Store, as a PS2 Classic, on May 16, 2012 in Europe.

In the dystopian near future, a deadly plague known as the Gray Death has befallen mankind. The only known "vaccine", Ambrosia, the distribution of which is tightly controlled by Orwellian government agencies, merely delays the inevitable. Terrorist groups are capitalizing on the increasing desperation of the common folk, and their increasing activity urges world governments to create the United Nations Anti-Terrorist Coalition (UNATCO). You follow JC Denton, a rookie elite UNATCO operative, who eventually becomes tangled in a conspiracy plot involving The Illuminati, The Knights Templar, Chupacabras, Greys, black helicopters, genetic design underground labs and rogue AIs.

The gameplay combines First-Person Shooter, Stealth-Based Game and RPG Elements – as you progress through the game you receive skillpoints to upgrade your various skills. You also collect "augmentation canisters," which work as cybernetic implants, giving JC extraordinary abilities at the cost of energy. Even though the gameplay has its flaws, its non-linearity and interactivity have received much praise from the press and players — it is actually possible to go through the game killing almost nobody.

Deus Ex has had several sequels. The original developers released Deus Ex: Invisible War in 2003, seen as a Contested Sequel by the fandom due to the drastic changes in gameplay and story, though it has been vindicated over time. Deus Ex: Human Revolution, a prequel, was released by Eidos Montreal in late August 2011. A side-story to Human Revolution, called Deus Ex: The Fall was released for iOS in 2013, and poorly-ported to Android and PC in 2014.

The game is also known for its relatively active modding community. GMDX

(Give Me Deus EX) is perhaps the most notable today, having a stated goal of attempting to "stay true to the original design principles that define Deus Ex, and seeks to improve all aspects of design", such as more advanced AI, more detailed level design, enhanced physics engine, updated graphics and audio design, and extensive bugfixing, rebalancing the skills and augmentations, and a mantling mechanic ala the Thief games, but without touching the plot and soundtrack. It is consistently given the title "The Definitive Deus Ex Experience" by players.

For major storyline mods, 2006 saw the release of the Zodiac mod, a fan-made Interquel that allows you to play as Paul Denton. In 2009, the most notable of the game's total conversion mods, The Nameless Mod was released, featuring an original non-linear plot and fully voiced dialogue. A fan-made prequel, 2027 featuring DirectX 9 graphics, and a non-linear plot was released in 2011. Deus Ex: Nihilum was released in 2013, and is set in an alternate continuity few years before the canonical start of the game.

As for gameplay mods, Shifter - a restored content/gameplay patch was released in 2007 and restores cut content and adds new gameplay options and additional weapons to the base game. In 2015, a visual upgrade mod, Deus Ex Revision, was published on Steam

(including the aforementioned Shifter with some other gameplay mods).

On April 7, 2015 a fifth game in the main series called Deus Ex: Mankind Divided was leaked, then officially announced through Game Informer magazine. It was then released on August 23, 2016.