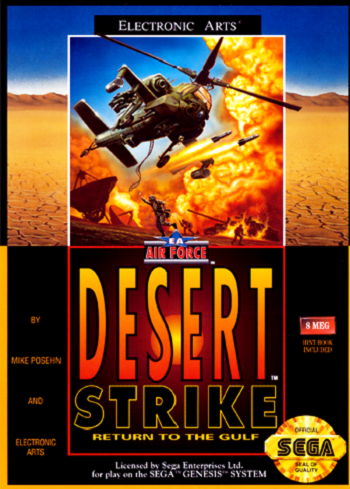 Desert Strike: Return to the Gulf is a 1992 Vehicular Combat game from Electronic Arts loosely based on the first Gulf War.
Advertisement:

The player controls an Apache gunship and undertakes several missions for the US government as they attempt to thwart the actions of the mad dictator, General Kilbaba.

Played from an isometric perspective, the game is more tactical than an out and out shooting game.

Coming so soon after the end of the war it depicts the game was initially thought to be in bad taste. Ultimately the quality of the game won out and it was a huge seller, spawning a number of sequels. Soviet in particular alludes to Desert in one mission suggesting the events of that game were retconned as a STRIKE mission, which could mean that STRIKE had a part to play in the other two games.