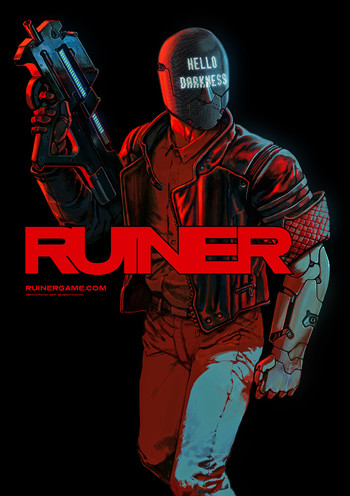 RUINER is a hardcore, top-down twin-stick shooter made by the Polish indie studio Reikon Games and published by Devolver Digital, released on September 26 2017 for PC, PS4 and Xbox One.

The year is 2091. Technology may have advanced, but the human soul has not changed — or if it has, it has been for the worse. In the city of Rengkok, a dirty, neon-lit Cyberpunk dystopia, where cybernetically-enhanced crime runs rampant and a gun (or even just a sturdy steel pipe) is the only thing keeping you alive, a huge, shiny building towers over the darkness of the maze-like streets below: the HQ of HEAVEN, an incredibly powerful corporation specialized in virtual reality, a nest of horrific secrets and shadowy corruption, a place where average people's lives are nothing more than amusing playthings.

In this grim setting, a mysterious, mask-donning sociopath is entangled in a shady plot concerning HEAVEN's Boss, the "Big Dog", and his kidnapped little brother, an unwanted "third child". Supported by an anonymous woman, claiming to be the best hacker in the world, and armed with LOADS of guns, he sets on discovering the truth... and beating to a pulp whoever stands in his way.

" was released in February 21, 2018, which not only adds even more new weapons, outfits, and Finishers, the second update also adds online leaderboards and a new Arena Mode where players fight waves of enemies for as long as they can live.