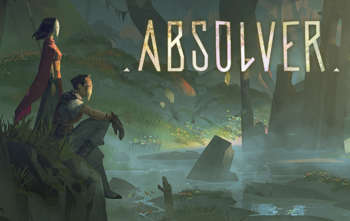 Make Your Move
"Combat is your art, and mastering the medium is essential to becoming an Absolver."
—Combat Overview Trailer

Absolver is an online Fighting Game Action RPG, developed by Sloclap and published by Devolver Digital.

Players assume the role of a Prospect, who has left their homeland seeking tutelage under the Guides, the mysterious new rulers of the fallen empire of Adal. The bravest and most skilled fighters from across the world travel to Adal in hopes of joining the Absolvers, an elite warrior corps. New Prospects undergo a ceremony that bonds their essence to a mask, which frees them from hunger, thirst, and even death. They are then transported to the ruins of Adal to begin their training and determine whether they are worthy of Absolution.

Prospects begin their journey with a basic move set, called a "Combat Deck," from one of three distinct styles of martial arts: Forsaken, Windfall, or the Kahlt Method. Facing other Prospects in Adal allows you to learn their moves - even ones from different styles - and incorporate them into your own Combat Deck, eventually creating your own unique fighting style.

The game utilizes a seamless multiplayer experience à la Dark Souls, where players can meet and interact with other Prospects making their way through Adal. Prospects can join forces temporarily and assist in taking down "Lost" Prospects, as well as duel one another to further develop their fighting skills. PvP arenas (known as Combat Trials) allow players to test their mettle against other Prospects for rewards, such as weapons or equipment.

Absolver was released worldwide on August 29, 2017 on Steam, GOG, and PlayStation 4. Free updates have been released since and are currently ongoing, adding a currency system, new gear, and new player-vs-player modes among other things.