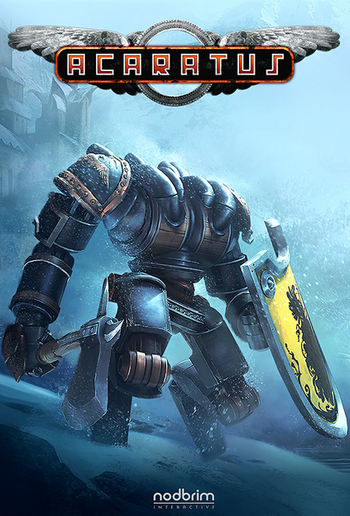 Acaratus is a Turn-Based Tactics game, developed by Nodbrim Interactive and released on PC in Steam Early Access on 25th February, 2016, with the full release following on 24th May, 2017.
Advertisement:

It is set in a Medieval-era Steampunk world, where a lord named Helios discovered the secret of creating battle suits, and used their overwhelming power to win the war for the realm and crown himself Emperor. Afterwards, he has forbidden anyone besides his elite Helian Guard from owning these battle suits on the pain of death.

Your character, Adina Collora, is a slave trader who kept one of these suits hidden. It comes back to bite her when a slave named Bolt escapes and informs the Imperial Guard of her heresy. Unfortunately for the Emperor, his underlings just couldn't play nice with their source, and had to pull Rewarded as a Traitor Deserves, deciding to execute them both. This forced Bolt, a former suit pilot to work with Adina, as they manage to get the suit running, curb-stomp the guards' own mech, send them running, and then find themselves with no option but to keep going with a rebellion they started.

The turn-based combat is fought between the combat suits on your and the enemies' side. Each suit has a range of stats, and can also possess a wide range of abilities that are written on a deck of cards, which are then drawn during combat.