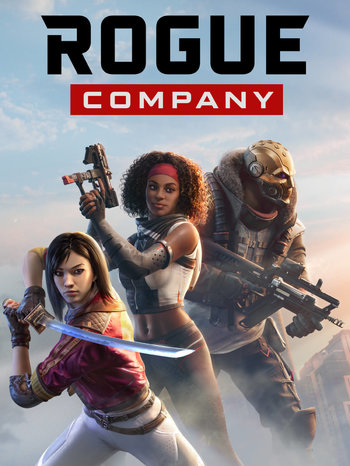 Save the day, look good, get paid.
Arms Dealer: So, how can I help you?
Ronin: I'm looking to make a statement.
Advertisement:

Rogue Company is a free to play 4v4 competitive multiplayer Third-Person Shooter game developed by First Watch Games, and published by Hi-Rez Studios (who previously published SMITE and Paladins). The game is currently in closed beta, which began on July 20th, 2020 for PlayStation 4, Xbox One, Nintendo Switch, and the PC (via the Epic Games Store and Steam), with various "Founders Pack" editions offered to give players beta access as well as some help getting into the game.

The gameplay borrows elements from the Counter-Strike series, and there are so far three online game modes in the game:

Rogue Company sets itself apart from Counter-Strike by adding Hero Shooter elements to the game. The Rogues are unique characters who bring their own weaspons and unique ability to the table, which shakes up any given match a player has. Like in Counter-Strike, the player's weapons and equipment are all bought in a store menu, as well as perks (such as reloading while sprinting and healing downed teammates faster) adding an economy management layer to the game, though which guns and perks you get varies on which Rogue you choose.

Also worth noting is that unlike its immediate competition; CS:GO and Valorant, Rogue Company offers cross-platform play and cross-progression between all four versions of the game from launch* CSGO is technically on the PS3/ Xbox360, but they're woefully outdated and do not support cross-play., something which Hi-Rez's other games; Paladins, SMITE, and Realm Royale, all have.

Enemies have planted the Tropes!

Sigrid also has a portable shield that negates all damage.