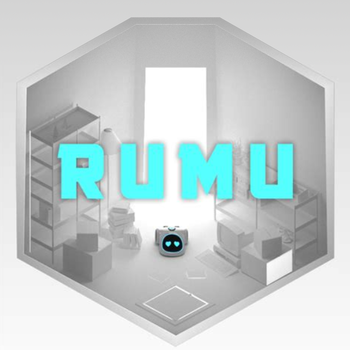 Rumu is a narrative-driven adventure game about a robot vacuum cleaner becoming self-aware. You play as a Rumu - a robot designed to clean, and to love.
Advertisement:

Rumu wakes in a fully automated Smart House with only Sabrina, the house Artificial Intelligence and watchful guide, the home’s dysfunctional cast of semi-intelligent devices and Ada, the cat as it's companions. Rumu is tasked with cleaning up after it's eccentric creators David and Cecily. Rumu is drawn you away from it's home maintenance duties and into the hidden passageways and long forgotten rooms of the house, you’ll be faced with challenging moral dilemmas forcing you beyond your programming to uncover the truth about your creators.

Tropes that apply to Rumu: