Video Game / Rise of the Dragon 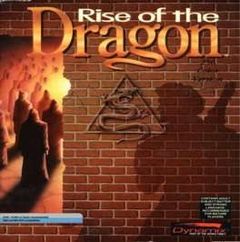 Rise of the Dragon was Dynamix's first foray into Point-and-Click Adventure Gaming after being bought out by Sierra in 1990. Unlike other games in the Sierra line, Rise of the Dragon featured a first-person perspective and two side-scrolling platformer sections in addition to the then-standard style of gameplay for an adventure game.

Rise of the Dragon is set in a Blade Runner-inspired Crapsack World. In the Los Angeles of 2053, ex-cop William "Blade" Hunter is hired by the mayor to find out who is responsible for the horrific demise of his daughter, Chandra, whose use of transdermal patches led her to be the first victim of a mutagenic poison.

The plot and characters are a blend of Film Noir tropes, After the End, and supposedly Chinese mythology, leading Blade to an Ancient Conspiracy to revive an ancient Chinese sorcerer (the titular "Dragon").

Rise of the Dragon was highly touted the following year, receiving a Special Award for Artistic Achievement from Computer Gaming World, and a 5 out of 5 star review from Dragon magazine.

After the initial DOS release, a CD-based version was made, followed by a Sega CD port of that rerelease which removed some of the more adult material (including the ammunition for Blade's sidearm, but not the weapon itself).