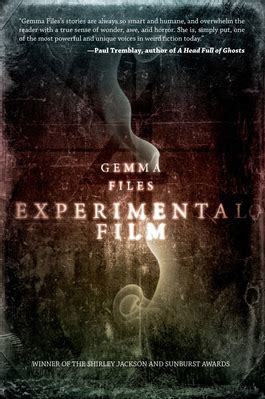 Experimental Film is a 2015 novel by Gemma Files.
Advertisement:

Former film teacher, critic, and amateur historian Lois Cairns discovers evidence that Mrs. Iris Dunlopp Whitcomb, a reclusive spiritualist and collector of fairy tales who mysteriously disappeared during a train journey in 1914, was also a filmmaker. As Lois investigates, she unwittingly invites the forces that haunt Mrs. Whitcomb's films into her life, endangering herself, her husband Simon Burlingame, and their autistic son Clark.