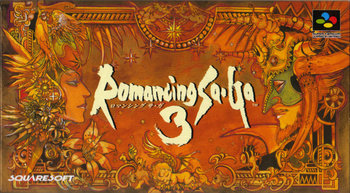 The children of destiny: the Matriarch (left) and the Archfiend (right).
The Rise of Morastrum — an event where the dark star blocks out the sun — threatens the very existence of our world. All born in that year are doomed to perish before its end.
However, during the first Rise of Morastrum 600 years ago, a sole child did survive. He came to be known as the Archfiend, leading the world to ruins.
Another 300 years passed, and again a child defied fate. She came to be known as the Matriarch, defeating the evil and bringing peace back to the world.
Now, 300 years later, the Rise of Morastrum strikes again, and the fate of the world hangs in the balance.
Will there be another child of destiny? Will the child be righteous, evil, or another force that the world cannot fathom?
Advertisement:
Romancing SaGa 3 is the sixth game in the SaGa series, released only in Japan in 1995 for the Super Famicom by Squaresoft due to concerns that the game's highly non-linear play style would not go over so well in North America. However, an Updated Re-release with new content came out internationally on November 11, 2019 for PC, consoles, and mobile platforms, following 2017's international release of Romancing SaGa 2.

The player can choose from eight different characters for their main character, with most of the others available as recruitable characters at various points in the game. These include: