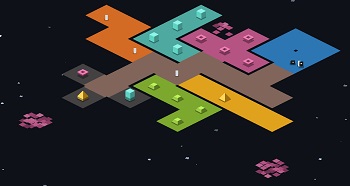 is an abstract Real-Time Strategy game by Martin Jonasson with music by Niklas Ström. It is heavy on the Minimalism, with everything represented by blocks and polygons. Available on Steam and for iOs and Android.
Advertisement:

You are in charge of building a space station. Direct your workers to build corridors, extractors to mine mineral resources, food production and housing, and weapons platforms to fight off periodic alien invasions. In addition, there are alien monoliths that can be researched to upgrade your workers and station operation.

The kicker? Your station is in 2-D Space, the rooms are 4 block Tetris pieces, and you have no control over the next shape you get. As your station expands, finding free places to fit in a particular room without accidentally walling yourself off becomes increasingly challenging. But don't get too distracted: when the timer reaches zero and the next increasingly-powerful alien fleet arrives, your workers had better be at the defense stations (You did build enough, didn't you?) if you don't want them slaughtered.

It's a race to research all of the monoliths before the aliens wipe you out.