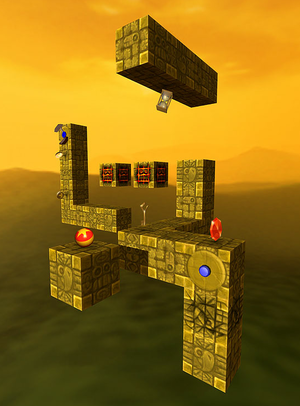 Roll Away is a PlayStation game in which you roll a beach ball through various three-dimensional block constructs suspended hundreds of feet above various exotic locales, collecting x number of keys to open the exit to the next level whilst also collecting fruits, coins and other shiny trinkets.

Released in the PAL region first (it was developed in Sweden, after all) under the name Kula World. In Japan, the game is known as Kula Quest note This was the originally-intended worldwide title (see Market-Based Title below). Roll Away was never a massive hit when it first came out, but thanks to its rarity, inclusion on various demo discs and sheer uniqueness, it still goes for over the odds on eBay long after being released as a download.

The game is said to have influenced the creators of Super Monkey Ball, and some of the original designers would go on to make Puzzle Dimension, a game based around a very similar idea.