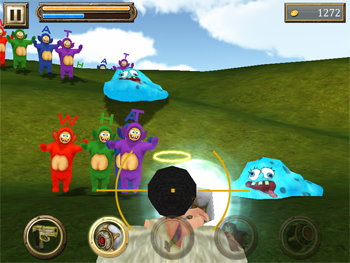 This is only the beginning...
Advertisement:

Sacred Guns is a 2013 iOS and Android action game made by independent developer Uglysoft with Mark Leung, known as the creator of the popular Final Fantasy parody College Saga.

Join Archangel Mark Leung as he protects Noah's Ark from hordes of rampaging mutant animals, across 25 levels of cartoon madness.

Sacred Guns juxtaposes biblical references with irreverent Internet humor. The biblical theme is reflected in the character design, weapon design, sounds and over-serious tone of the story, whereas the funny and light-hearted elements take the form of crazy monsters and insane characters.

The end result is a game that feels wrong in many ways, yet underneath lies a well-balanced and engaging game with sensible mechanics, giving players a strangely unforgettable experience.