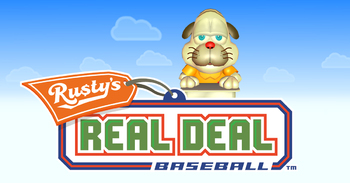 Rusty's Real Deal Baseball is a free-to-download game on the Nintendo 3DS eShop. It's notable as the first game Nintendo released to have Microtransactions.
Advertisement:

The story follows an anthropomorphic dog named Rusty, who owns a store called Rusty Slugger's Sport Shack. With a dysfunctional family life and struggles to sell his sporting equipment, he decides to start selling baseball-themed video games to renew his business and hopefully improve things at home as well.

To advance the story and unlock more games to play, the player must actually buy them from the eShop at a maximum of $4.00 each (totaling $40 plus tax, or $16 plus tax in a perfect run). Haggling comes into play, to reduce the price and earn discounts. The player can haggle down the prices by giving Rusty items that can help him set things right with his family.