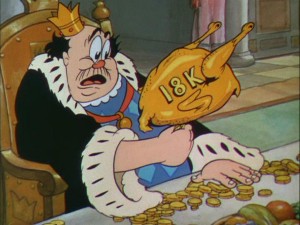 Conspicuous Consumption has never been so literal.
Advertisement:

A character is given a special ability so that everything they touch turns into a certain substance of superficial value to the character that gets it, such as gold or candy. However, that character soon finds out that this ability is actually undesirable. At the very least, the side effects of their ability are just plain annoying, but at worst, something Goes Horribly Wrong with this new ability and they have to reverse it. The lesson is often that Greed is bad.

The myth of King Midas is the Trope Codifier. It tells of a king who wished everything he touches would turn to gold. The Greek god of wine Dionysus gives him this ability, which he enjoys at first but finds it has its drawbacks, such as when he can't really eat anything and turns his daughter into gold by hugging her.

This power can turn a person or creature into Brown Note Being, if the touch is harmful.

Subtrope of The Magic Touch, Made O' Gold, and Blessed with Suck. Compare to Touch of Death.

A controllable version. Ramsey's Epithet, Goldbricker, allows him to turn himself and any object into gold and back again.

A controllable version. Ramsey's Epithet, Goldbricker, allows him to turn himself and any object into gold and back again.