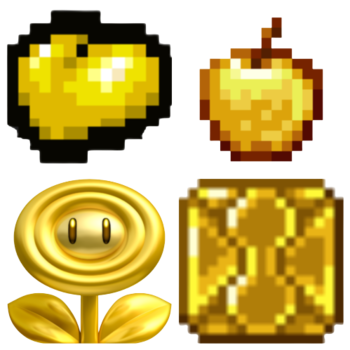 Super-Trope to Midas Touch, Bling-Bling-BANG!, Gold Tooth, and City of Gold. Sub-Trope of Gold Makes Everything Shiny. Can also overlap with Taken for Granite should the item be a living thing somehow turned into gold; for living creatures who can voluntarily turn themselves into gold, see Chrome Champion. Compare Gem-Encrusted. An inversion would be an item normally made of gold, such as a crown, being made of something like wood, non-valuable metal, or plastic.

Very little Truth in Television, as gold is a metal that is very soft and malleable, rendering it ineffective for use in anything but decoration. Gold objects with any degree of actual utility in real life are going to be merely plated with gold, not made entirely from it.