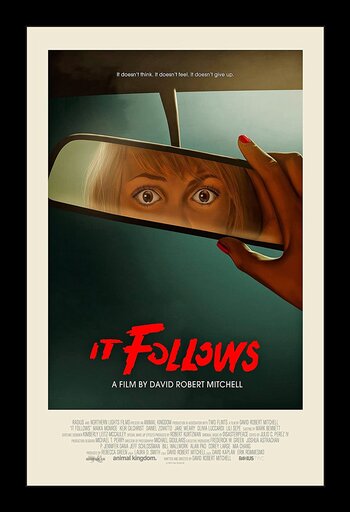 "You're not going to believe me. But I need you to remember what I'm saying. Okay? This thing. It's going to follow you. Somebody gave it to me. And I passed it to you. Back in the car. It could look like someone you know. Or it could be a stranger in a crowd. Whatever helps it to get close to you. He could look like anyone. But there is only one of it. And sometimes...sometimes I think it looks like people you love. Just to hurt you. [...] You get rid of it, okay? Just sleep with someone as soon as you can. Just pass it along. If it kills you, it'll come after me. Do you understand?"
Advertisement:

It Follows is a 2015 supernatural horror film written and directed by David Robert Mitchell. It debuted at the 2014 Cannes Film Festival in May before receiving both limited and wide releases the following March.

The film follows Jay Height (Maika Monroe), a 19-year-old student living in the suburbs of Detroit. After a sexual encounter, she becomes stalked by a nameless entity. The film then becomes an exercise in existential dread: no matter how far Jay runs, she must face the mounting dread of its slow but relentless approach, and the fact that she will never be totally safe, even if she passes it on.

It Follows is notable for the audiovisual influence it takes (to retraux levels) from horror films of The '70s and '80s, with Mitchell specifically citing George Romero and John Carpenter as inspirations. He got the idea for the film from a recurring dream that he had as a child about being followed, later incorporating the idea of sexual transmission.

It Follows contains examples of: