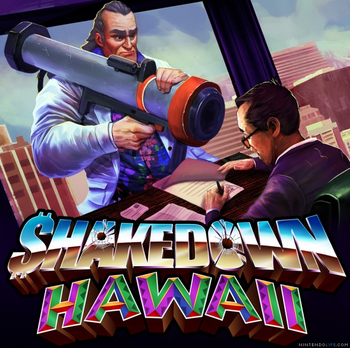 Shakedown: Hawaii, developed by Canadian studio Vblank Entertainment, is the spiritual sequel to Retro City Rampage. It was released on May 7th, 2019 for Microsoft Windows on Epic Games Store, PlayStation 4, PlayStation Vita, Nintendo 3DS and Nintendo Switch, followed by ports on July 9th, 2020 for the Wii and August 2020 for the Wii U (along with a Windows release via Steam). And yes, you really are reading these last two consoles and dates correctly.

The game uses same gameplay and graphic style as its predecessor (though where Retro City aimed for an 8-bit aesthetic, Shakedown tries to emulate the games of the 16-bit era), but the story this time leans less towards parody, and more heavily towards satire.
Advertisement:

Taking place 30 years after Retro City Rampage, it stars an old, overweight (soon to be) Corrupt Corporate Executive in a quest to save his floundering company via crooked business practices aided by his son and his hired gun, in 16-bit graphics and Synthwave soundtrack.