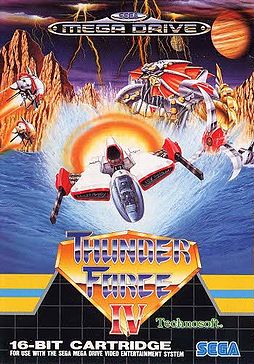 A Shoot 'em Up series by now-defunct Japanese game developer Technosoft, which began in 1983 as an obscure multi-directional overhead shooter. It eventually transformed into a side-scrolling shooter from the third installment onward and became famous among the classic gaming community for its memorable synth-rock soundtrack.

The Excuse Plot puts the player in the shoes of a Galaxy Federation soldier piloting the Fire Leo series of starfighters against the overwhelming odds of the cybernetic ORN Empire. Thunder Force V shifts the focus to Earth wherein humans discover the wreckage of Thunder Force IV's Fire Leo Rynex ship, which they refer to as "Vasteel", and begin to reverse-engineer its technology for the betterment of mankind. However, things go very wrong when the Guardian, an advanced A.I. designed for the purpose of reverse-engineering Rynex, goes haywire and decides to use the military technology it created based off of the alien starfighter to try and wipe out the human race—but not before humanity manages to create its own Vasteel starfighter. Thunder Force V is also known for having more story than the previous games, which ties together the events of IV.

The sixth installment was trapped in Development Hell for a decade, but was eventually released.

[Troper/Human], May Fortune be with you...