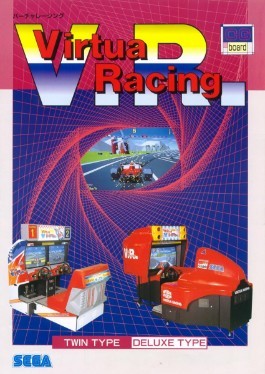 Virtua Racing is a Racing Game published by SEGA and developed by their AM2 division for the Sega Model 1 arcade hardware, released in 1992. While not the first racing game to use 3D polygonal graphics — Atari's Hard Drivin' predates it by three years — it's notable for having extremely smooth 3D animation for its time, running at 30 frames per second.

In terms of features, there aren't many to speak of: You pick one of three courses, decide whether you want to use automatic transmission or 7-speed manual, and then get in an open-wheel car and race against 15 CPU opponents or anywhere from 1-7 human opponents depending on how many cabinets are linked up. But the game makes breathtaking (for its time, anyway) use of these features, with full 3D environments and a "V.R." viewpoint system that lets you choose from one of four different viewpoints rather than being fixed to behind-the-car or cockpit only like in past games.

The arcade version comes in four cabinet types: an upright cabinet, a Twin Type cabinet that seats two players and can be linked up to other cabinets of its kind, a Deluxe Type cabinet that features a 16:9 screen (in 1992!), and a premium 8-player "Virtua Formula" setup with large projection screens and motion seats for each player.

The game has been ported to many platforms: