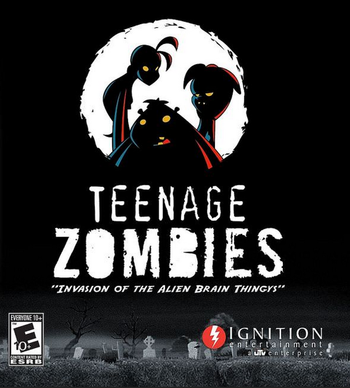 Teenage Zombies: Invasion Of The Alien Brain Thingys is a Platform Game developed by InLight Entertainment for the Nintendo DS, and released on March 28th, 2008.
Advertisement:

The earth is being invaded by alien brain... thingys. They've already begun enslaving the minds of humanity, and all seems lost.

However, hope comes from the most unlikely place... a trio of teenage zombies have been disturbed from their slumber by the invasion, and where humanity sees their doom, the zombies see an all-they-can-eat brain buffet. Their undead state means they're immune to the brain thingys' mind control devices, which means that now the aliens have a problem on their nonexistent hands.