Video Game / They Are Billions 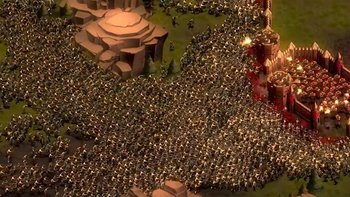 They are coming to get you... Commander
"Oh my God! Infected coming from every direction! THEY ARE BILLIONS!!!"

They Are Billions is a Post Apocalyptic Steampunk survival real-time strategy game by developed and published by Spanish independent studio Numantian Games, known previously for the Lords of Xulima. The game was initially released for PC on Steam's Early Access in December 2017 with survival mode. The full game was officially launched with the addition of a "New Empire" campaign on June 18, 2019. Ports for the Xbox One and PlayStation 4 followed on July 1st, 2019.

In the 22nd century a Zombie Apocalypse has destroyed civilization and nearly the entire human population of Earth. Technology for those who survived has regressed to late 19th century levels with the collapse of civilization. General Quintus Crane is attempting to establish a new Human civilization capable of withstanding zombie attacks and slowly reclaiming the planet. You are one of his field commanders, tasked with reconquering lands from the Infected and building new colonies.

The game is noteworthy for the sheer number of Infected units on screen and their ability to swarm over base defenses.