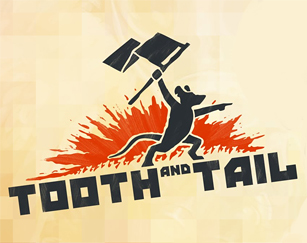 is a Black Comedy Real-Time Strategy game by Pocketwatch Games, the same people who did Monaco. It personifies The Revolution Will Not Be Civilized in its most "Canni-malistic" form: whoever loses the revolution will literally be cooked and eaten. Set in a world stylized after mid-1900s eastern Europe and populated by bipedal animals, winter is coming, the Swine are dwindling in number, and nobody wants to eat salad for three months straight. Four radical factions (Longcoats, Commonfolk, KSR, Civilized) have decided mass-genocide of their hated enemies would be worth a roasted steak every night, and they've promised their soldiers the corpses of the dead. With hunting tools for guns and cooking hardware for artillery, there's only one way this is going to end: in a brutal buffet of slaughter!

You've played the tales of revolution a hundred times over. This time, the bodies of good people you mow down for your cause will actually be worth something — your lunch.

The trailer for the Playstation 4 release

is now available, and the PC version can be bought on Steam

and on Good Ol' Games