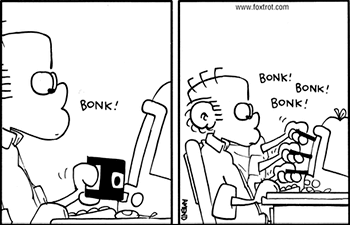 Well at least he can't copy that floppy.
Barley: The other day I bought a DVD, but there were just so many buttons on the remote control that I had to get my daughter to come over and help.
Scallop: Yup, me too. I just leave my cellphone contract up to my daughter. I can't seem to remember anything new nowadays...
Both: That's old age for you!
— Gohan no Otomo
Advertisement:

Modern works are set in modern times, often, and especially so when the creators want to appeal to a young, hip audience. As a means of definitively proving that they themselves are securely young and hip, the creators may highlight how a character, perhaps of their own age or older, is not in any way.

The greatest way to do this is to have the cool young people using some technology invented since Christmas and the ever-wanting-to-seem-cool older person wanting to get involved but having absolutely no clue what on Earth their gadgets are. Often Played for Laughs when it's the parent who pretends to know what it is before hastily leaving, or trying to punish the kids by confusedly confiscating their... gizmo. May trigger a "back in my day" story.

Compare Fish out of Temporal Water, when someone is displaced from his own time and so can't possibly know what all the new technology is, rather than that he didn't bother catching up because of any number of reasons the older character may have: The olden days were better, they see it as more trouble than it's worth, or just plain extraneous, or there's no point because the tech isn't necessary and will be replaced by something else in a few days, anyway. Contrast What Are Records?, the inverse, and Phoneaholic Teenager. Subtrope of Technophobia. Subtrope of Hopeless with Tech, which is not about any age group.

Anne's dad tries to put his cellphone on speakerphone while calling Anne from the movie theater, but he ends up causing Anne to be in a dual face-ime with him and her grandmother.

Anne's dad tries to put his cellphone on speakerphone while calling Anne from the movie theater, but he ends up causing Anne to be in a dual face-ime with him and her grandmother.