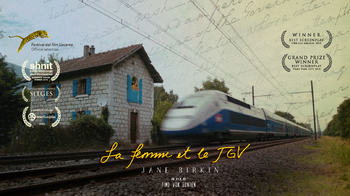 La Femme et le TGV is a 2016 short film (30 minutes) from Switzerland, in the French language.

Elise (Jane Birkin) is an old lady who lives in a rural Swiss village. Actually she lives outside the village, by the railroad tracks. Her husband is dead, her son rarely talks to her, and her business, a bakery, seems on the verge of going under, unable to compete with an inferior but much cheaper chain bakery. All in all, her existence is rather cheerless.

Cheerless, that is, except for the twice-a-day passage of the TGV high-speed railway train. Elise makes a point of always greeting the train by waving a Swiss flag—she's done this since her son was small. One day she's out mowing her lawn when to her surprise she sees a scrap of paper in her yard. The engineer, a fellow named Bruno, sent her a note in which he says how much he enjoys seeing her greet his train every day. She writes him back c/o the railway, he chucks a present (a wheel of cheese), out the window of his 300 km/h train, and soon they've struck up a pen pal relationship. Could it lead to more?

Meanwhile, Elise brushes off the overtures of Jacques, a young man who works in the dance school across the street from her bakery. He is young enough to be her grandson but seems to want to be her friend.