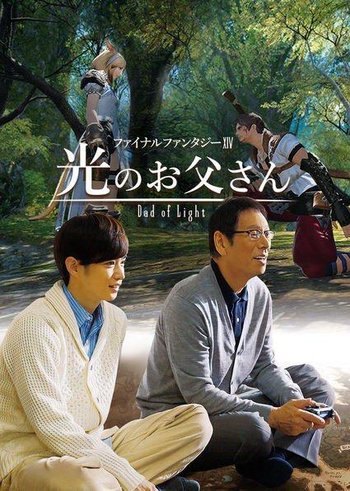 Set in part in their onion-slicingly popular MMORPG Final Fantasy XIV, and Based on a True Story from a blog titled, Ichigeki Kakusatsu SS Nikki under the sub-category, Project: Dad of Light chronicled by a real FFXIV player named "Maidy Maidy;" whose project garnered a grand readership following through his 9-month journey documenting his attempts to reconnect with his father through FFXIV, and whose user account was used in recreating the drama.

Akio Inaba, a young office worker, has been distant from his father, Hirotaro. For many years, despite living under the same roof, the two haven't talked beyond a few words with one another since Akio was a child. One day during the year of 2014, Akio's mom notified him that his dad suddenly quits his job without consultation. Stunned, confused, and not knowing how to break the ice with his dad over the reason why he had quit his job, Akio recalled how his father bought him Final Fantasy III when he was little, and how they bonded over the game. To that end, he hopes to use his passion for FFXIV to reconnect with his father; he buys a copy for Hirotaro, and plans to befriend him in-game, keeping his identity a secret while trying to understand his father better.

The series premiered in Japan in April of 2017, and was released worldwide via Netflix in September of the same year. It aired a total of 7 episodes, with an extra 8th encore episode.

On June 21, 2019, this title released a movie edition featuring a new cast of actors, along with a slight tweak in having additional supporting cast.

On December 6, 2020, the player behind Maidy passed away from cancer